Egyptian officials hail the brightly colored, ornate sarcophagi as one of the biggest discoveries of 2020.

Charlene Gubash is an NBC News producer based in Cairo. Gubash, a native Minnesotan, has lived and worked in the Egyptian capital since 1985.

Adela Suliman is a London-based reporter for NBC News Digital.

SAQQARA, Egypt — Under a huge white canopy tent facing Egypt’s oldest pyramid, part of a cache of more than 100 sealed and intact mummies were unveiled Saturday, along with 40 statues of deities, ornate sarcophagi and gilted masques.

Buried more than 2,500 years ago, the colorful, intricately decorated coffins were the most recent discovery at the vast necropolis south of the country’s capital Cairo, which has been excavated over a three year period by an Egyptian mission.

Egyptian officials hailed the brightly colored encasements as the biggest discovery of the year.

The coffins belonged to “very rich, elite, high ranked people,” Mostafa Waziri, the general director of Egypt’s Supreme Council of Antiquities told NBC News, as they were displayed for the first time in front of the towering and triangular Step Pyramid.

More than 100 intact sarcophagi were displayed at the Saqqara necropolis around, 20 miles south of Egypt’s capital Cairo.Charlene Gubash / NBC News 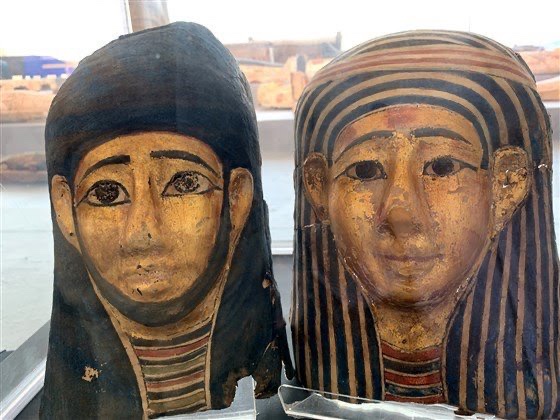 Waziri was speaking before a live scan of one of the mummies showed it was a male, probably aged between 40 and 45, with teeth in perfect condition.

Likely from the Ptolemaic period, the mummy must have been very wealthy, as his arms were crossed over his chest, a repose that normally symbolizes royalty, although Waziri said he was not a king.

“It gives me such a great feeling,” Waziri said. “We still have a lot to reveal.”

The artifacts will be shared between four museums in Egypt, including the new Grand Egyptian Museum, set to open next year. 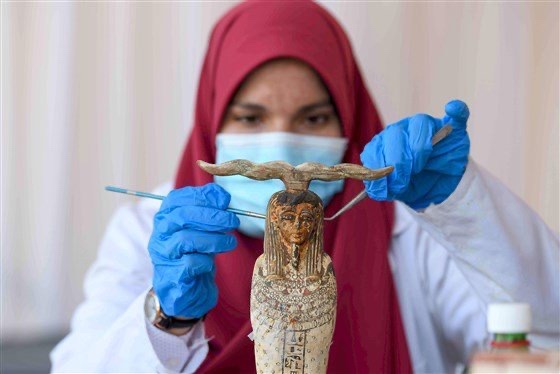 Egypt’s Minister of Tourism and Culture, Khaled Al Anany added that “more than 40 artifacts” had been found, including funerary masks, figurines and statues, the majority of them gilded.

He said that work would continue at the site and he thought another “promising discovery” would be announced soon.

The artifacts were discovered less than a month after more than 50 ancient coffins, ornate statues of deities and animals were unveiled in October. One contained the pristine mummy of an ancient priest.

Download the NBC News app for breaking news and politics

The Saqqara plateau is part of the necropolis of Egypt’s ancient city of Memphis. Designated a UNESCO World Heritage site in 1970s, it includes the famed Giza Pyramids.

Hundreds of mummified animals, birds and crocodiles, as well as two mummified lion cubs were found in the region last year. 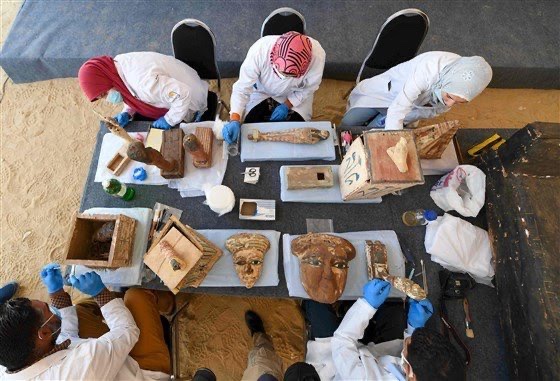 Archaeologists clean statues and funerary masks during the unveiling of an ancient treasure trove of more than a 100 intact sarcophagi, at the Saqqara necropolis on Saturday.

Egypt has heavily promoted new archaeological finds to international media in recent years, in an effort to revive its tourism sector, which has suffered since the 2011 Arab Spring uprisings that toppled autocrat Hosni Mubarak.

The sector was dealt a further blow this year by the coronavirus pandemic.